Book Of The Month for Promise Middle School

For December Ms. D. has chosen The Empty Pot by Demi. The book is about a boy named Ping with an emerald green thumb; he can make anything grow ``as if by magic.'' One day the Emperor announces that he needs a successor, someone who can carry on after he is gone with the ruling of the kingdom and the growing of the flowers. He gives each child one seed, and the one who grows the best flower will take over after him. Competition is fierce, and Ping is heartbroken that nothing comes up, despite his careful tending. On the day of the competition, he is the only child with an empty pot; all the others brings lush plants. But the Emperor has tricked everyone by distributing cooked seeds, unable to grow; and Ping, with his empty pot, is the only honest gardener--and the winner. 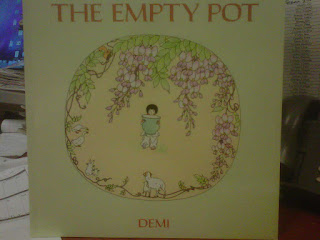 Chef June and I are looking forward to eating lunch at the Chefs Table with the winners of the "Character Trait of the Month."
Posted by Chef Andrew at 10:08 AM No comments: