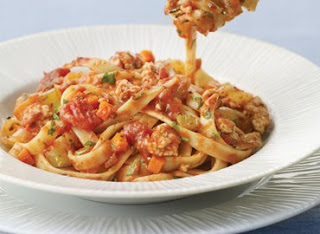 In recent decades, the dish has become very popular in Australia, Sweden, Finland, Denmark and Norway. It is called spagetti med köttfärssås, in Swedish, spagettia ja jauhelihakastiketta, in Finnish, spaghetti og kødsovs in Danish, and spaghetti og kjøttdeig in Norwegian, especially among children. A version is popular in the United Kingdom. In the United States, the term 'bolognese' is sometimes applied to a tomato-and-ground-beef sauce that bears little resemblance to the ragù served in Bologna.
Posted by Chef Andrew at 3:02 PM