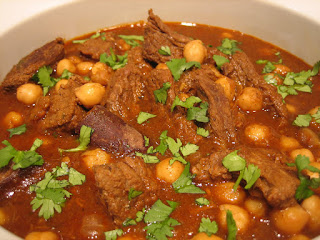 A tajine, or tagine (Berber: tajin), is a Berber dish from North Africa, that is named after the special earthenware pot in which it is cooked. A similar dish, known as tavvas, is found in the cuisine of Cyprus. The traditional tajine pot is formed entirely of a heavy clay, which is sometimes painted or glazed. It consists of two parts: a base unit that is flat and circular with low sides, and a large cone or dome-shaped cover that sits on the base during cooking. The cover is so designed to promote the return of all condensation to the bottom. With the cover removed, the base can be taken to the table for serving.