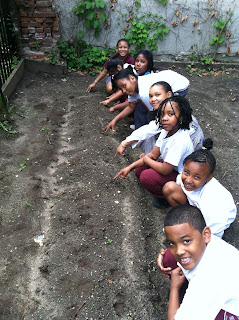 Today is the Summer Solstice in New York (hello, longest day of the year!) and in the garden we've been talking about several key terms that relate to the change of season. Yesterday we discussed what it means to "Eat Local. Think Global." This catchy phrase has been circulating around the food world for years now (if I knew it's origin I'd give the person some serious props!) and it's a concept that we want our students at Promise Academy and HCZ to really understand. In fact, it's one of the headlines on our cafeteria posters which we promised to do a follow-up series of blog posts about...so, let's get started.

First let's make sure we understand the terms we're using. What does it mean to "eat local?" Local food comes from your region. If you live in New York City, eating "local" means that you get most of your food from farms in the nearby counties in Long Island, Upstate New York, New Jersey and maybe even Pennsylvania rather than raising it yourself. Imagine yourself as the center of your world (probably not that hard for some of us!) and draw a 100-mile radius around yourself on a map. This is your local food region. If you manage to "eat local" you'll be considered a locavore. (You may be surprised to learn that most of the food we serve at Promise Academy including all our produce, dairy and meat is locally-sourced. Find out more about the food in the Cafeteria here.)

So, why eat local? From the posters our students, learn that local food is fresher, seasonal, and more nutritionally dense. It hasn't traveled thousands of miles to get to your plate which means it tastes better and its better for you and for the environment. Plus eating local food supports your local community and the regional economy. Pretty cool, right?

So what about eating seasonally? This is actually probably a little more challenging for the modern America. We're so used to having access to everything all the time, it's hard to reign in our habits back to what nature is serving up according to our local season. This has contributed to the fact that we eat fresh tomatoes (or bananas) year round that are shipped in from distant countries. It has also made us less connected to the joys of the cycle of the season. Eating seasonally actually can save you money, because the produce that's in season is usually the least expensive. Eating locally and seasonally actually go hand-in-hand, if you start by trying to eat more local foods, you almost can't help but eating more seasonally, which brings us finally to the last point: the big picture.

Thinking globally means you engage the big picture. (Remember that map of you as the center of your own local food community? Picture now that you are zooming out from your local community, keep zooming so far out that you disappear and now you've got an astronaut's perspective on this beautiful blue planet.) In the grand scheme of things, you are just one small part of the whole system of the world, the universe. That doesn't mean you aren't important or can't make positive change, but it just puts things in perspective. Surprise! The world revolves around the sun, not around you. Still your actions are significant, because while you may just be one person you are one of nearly 7 billion people on this planet. To maintain balance with our environment, we all have to consider how our actions impact those around us and the planet. Together we can create a sustainable future.

And that gives us much to look forward to as we celebrate the Summer Solstice here in Harlem! So go outside today and salute the sun and consider how you can eat in a way that is more in step with the earth's seasons and your unique place in the world.
Posted by Garden Gal at 12:30 PM