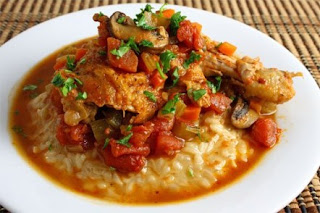 There are many different variations of this dish based upon ingredients available in specific regions. For example, in southern Italy, cacciatore often includes red wine while northern Italian chefs might use white wine.

A basic cacciatore recipe usually begins with a couple of tablespoons of olive oil heated in a large frying pan. Chicken parts, dusted with salt and pepper, are seared in the oil for three to four minutes on each side. The chicken is removed from the pan, and most of the fat poured off. The remaining fat is used to fry the onions, mushrooms, peppers or other vegetables for several minutes. A small can of peeled tomatoes (drained of liquid and coarsely chopped) is added to the pan along with some oregano and a half cup of dry red wine. The seared chicken parts are returned to the pan which is then covered. The dish is done after about an hour at a very low simmer.

Come joins us for lunch!
Posted by Chef Andrew at 12:15 PM