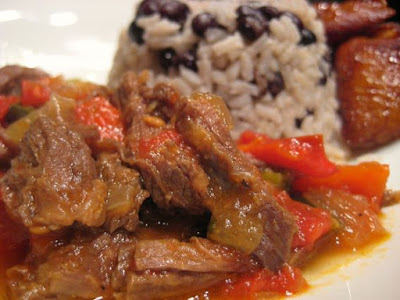 After a recent trip to Miami, I was inspired to bring a bit of the Cuban flavor back home. We are going to prepare Ropa Vieja with Frijoles Negro y Arroz (black beans and rice). Please join us. Buen Provecho!

Ropa vieja originated in the Canary Islands (Spain), which were the last place ships from Spain would stop on the way to the Americas. They were also the first place that Spanish ships coming from the Americas would stop en route back to Spain. Due to this, Canarian culture is very similar to the Caribbean as well as Spain. The Canarian Spanish dialect of Spanish spoken there is very similar to the Caribbean and sounds extremely close to the dialects of Cuba and Puerto Rico, due to heavy and continuous immigration to both islands. This is how ropa vieja arrived in the islands; with the Canarian immigrants.[citation needed] The original version of ropa vieja contained leftovers, but later became a shredded meat dish with chickpeas and potatoes in the Canary Islands.

There are many theories as to how the dish was named. One of the more popular ones is a story about a man whose family was coming to his home for dinner. Being very poor, the man could not buy them enough food when they came. To remedy his situation, he went to his closet, gathered some old clothes (ropa vieja) and imbued them with his love. When he cooked the clothes, his love for his family turned them into a wonderful beef stew.
Posted by Chef Andrew at 12:17 PM