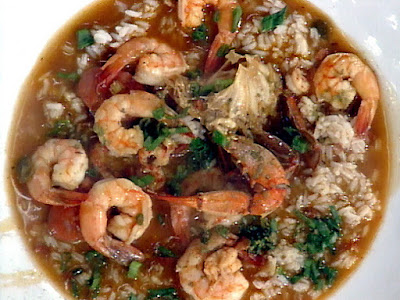 
Jambalaya History
Creole jambalaya originates from the French Quarter of New Orleans, in the original European sector. It was an attempt by the Spanish to make paella in the New World, where saffron was not readily available due to import costs. Tomatoes became the substitute for saffron. As time went on, French influence became strong in New Orleans, and spices from the Caribbean changed this New World paella into a unique dish. In modern Louisiana, the dish has evolved along a variety of different lines. Creole jambalaya, or red jambalaya as it is called by Cajuns, is found primarily in and around New Orleans, where it is simply known as 'jambalaya'. Creole jambalaya includes tomatoes, whereas Cajun jambalaya does not.

Cajun Jambalaya originates from Louisiana's rural, low-lying swamp country where crawfish, shrimp, oysters, alligator, duck, turtle, boar, venison, nutria[1] and other game were readily available. Any variety or combination of meats, including chicken or turkey may be used to make jambalaya. Cajun jambalaya is known as 'Brown jambalaya' in the New Orleans area; to Cajuns it is simply known as 'jambalaya.' Cajun jambalaya has more of a smoky and spicy flavor than its cousin Creole jambalaya.[citation needed] The white French Creoles introduced jambalaya to the Cajuns, but since tomatoes were rarely used in Cajun cooking, they omitted them, browning the meat for color instead
Posted by Chef Andrew at 11:52 AM